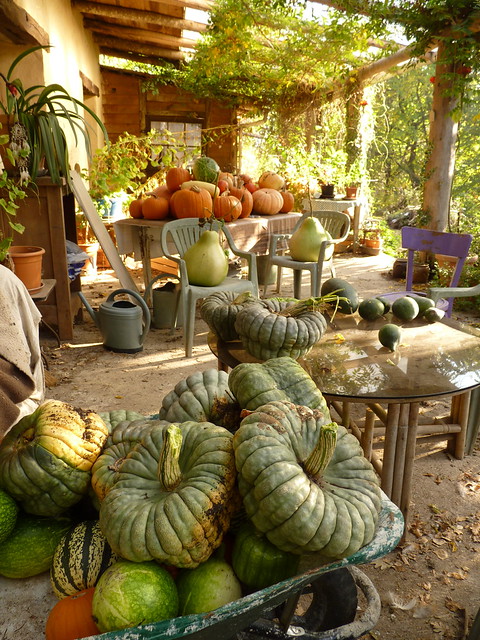 Lots of people have been asking me how we manage to keep our pumpkins for so long, so I’ve put together a list of things that you need to do to ensure that you’ll have pumpkins to eat all winter and for most of the following spring.

To get really good mature pumpkins, make a note of the number of days they need to grow to maturity. That’s usually marked on the packet if you buy them and for seed swaps, ask people to remember to add that information to the packet too, because it’s important.

Bear in mind that some varieties of squash will keep well in store for a lot longer than others. For example the Siamese squash  (Fig-leaf gourd, Malabar gourd, black seed squash or Cidra) which is in the wheelbarrow in the photo on the left, can be stored for up to two years. The Queensland Blue on the right can be kept for about five months.

Some pumpkins need a long growing season, so for those, about three weeks before the the last frost is due, I either plant them outside and cover them with a cloche which I tuck in with some mulch around the outside, or start them off in the greenhouse.

If you plant good seeds in a greenhouse, they’ll probably sprout amazingly quickly, so make sure your pots are really deep so that the root has enough room to develop, as most squash resent root disturbance. Empty the pot gently when you plant them and take care when you fill up the planting hole. Water in the young plants really well.

It goes without saying, that the richer the soil the better and pumpkins do really well on raised mounds of last year’s compost with anything and everything added to it.

The art of growing pumpkins to avoid cross pollination for seed-saving is a completely different subject and I’ll cover that in another blog post. For the moment, let’s imagine that summer is coming to an end and you’re watching your pumpkins get bigger every day…. 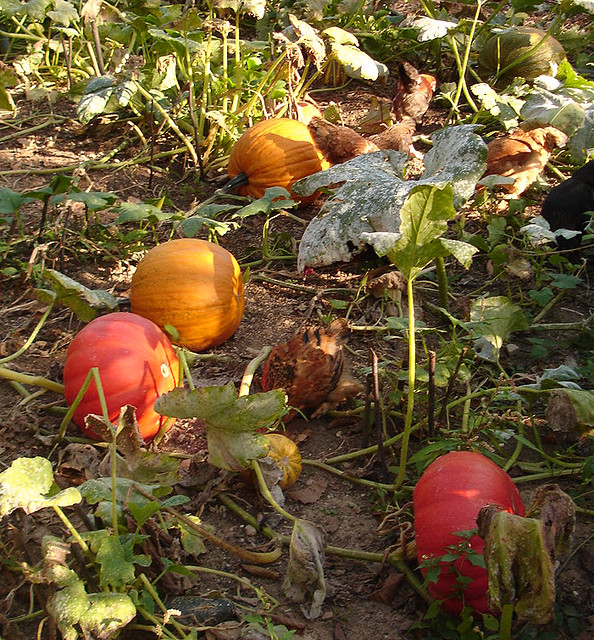 If your objective is to store some for use over winter, leave them on the vine for as long as you can. In a good summer, the leaves will die and become brown and withered, leaving the pumpkins exposed but always remember to gather them in before the frost. (If you’re a day or so late, you can still eat lightly frosted pumpkins, butternuts etc. straight away but they rot quickly and will not store.)

If there a good strong stem then the pumpkin is normally good to store BUT if it has any discolouration after being in contact with the ground or nearby bushes, use it immediately.

Check around the stem for cracks or soft patches, if there’s any doubt, use it straight away.

Never carry a pumpkin by the stem, carry it gently, like a baby

Leave them to ‘cure’ in a dry place in full sunlight with good ventilation for about ten days. A covered terrace like ours in the photo is ideal.

Store only mature pumpkins with hardened skins (Test the skin with your fingernail) they should sound dry/hollow when you tap them and have a good all-over colour.

Wash around the top stem, the base of the pumpkin then give it a rub all over with eau de vie, vodka or some other strong alcohol. Don’t be mean.

Make sure the pumpkins are completely dry then store them in a dark, dry place between 10-15°c

Use wooden planks or fruit boxes to keep the pumpkins off the floor and allow the air to circulate around them.

Check them regularly to make sure that they are still in good condition.

The Pink Jumbo squash in the photo above was gathered on the 22nd of September then cured for a week in the sun on the terrace.

A photo of the same Pink Jumbo (Cut in half) was taken on the 14th of May – about eight months later and both the inside and outside were in perfect condition and I and the Council of Administration of Brin de Paille (The French Permaculture association) who stayed with us for a few days for one of their quarterly meetings, can assure you, it tasted great !