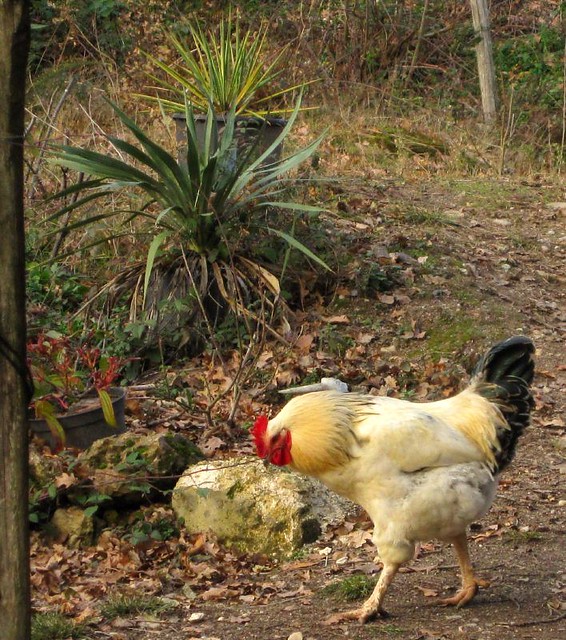 This boy got beaten up by a band of roaming youngsters that I call the red bunch and as he was walking away with his head down I started taking photographs of him and he suddenly perked up and strode along proudly as though to show me that he was non the worse for his humiliation.

The culprits were a large group of young red cockerels who are now at sexual maturity and are a pain in the whotsit – not just because they’re fighting with all the other young cocks but also they’ve started to gang up on the girls and the poor things have to walk the gauntlet before being allowed into the chicken shed to roost for the night. 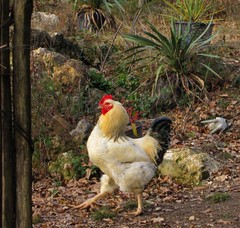 Anyone who has kept chickens will know what I mean – I almost feel like throwing something at them when they start their antics and the girls are becoming nervous and scatty and if this goes on any longer they’ll go off the lay, their backs will lose their feathers and some of them may be tempted to sleep outside and risk an encounter with Mr Fox. 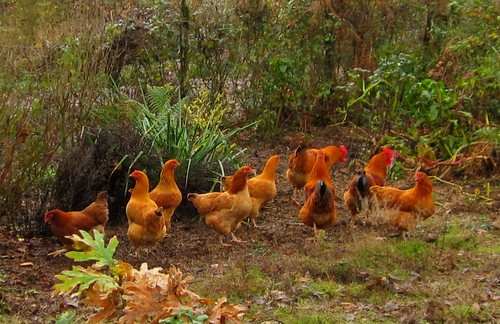 It’s been a real joy all summer to see this year’s chicks grow up. A high proportion of them are bright orange with a few blacks and a couple of pure whites. All of them are in great condition, bright eyed and constantly on the move.

The garden has been brought alive by the flashing past of dozens of orange chicks running when they hear the feeder being filled up. But I counted the chickens this morning and there are fifty and an awful lot of them are young males. I’ll try to find homes for the best cockerels – normally my neighbours are interested if they need to change their stock – but sadly, it’s not worth feeding them all winter and the time has come to cull them and get them into the freezer.