We’ve had two miniature Dachshunds for some years and they really are wonderful little dogs. 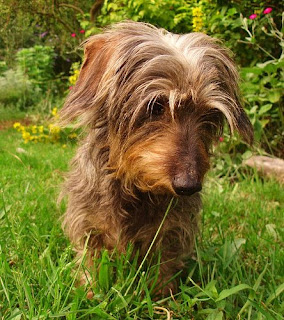 Bonnie is now eight years old. She was our first Dachshund and I have to admit that I never used to like this breed because when I was a student in Glasgow my landlady had a horde of smooth-haired dogs and when I came in late they “welcomed” me home yapping and biting at my long skirts and flares. I always dreaded putting my key in the door.

I’ve loved dogs all my life but this particular breed makes me very nervous and when Fabrice was invited by one of his hunting friends to go and see a litter I could see what was coming.

We came home with this little creature who looked more like a rat than a dog on the understanding that she’d be sterilised as soon as she was old enough. I regret that now because Bonnie has grown into a very interesting, intelligent little dog and her main rôle in life is hunting with Fabrice and tracking animals injured by hunters or by cars. She’s fearless without being reckless and when she’s tracking she never gives up. 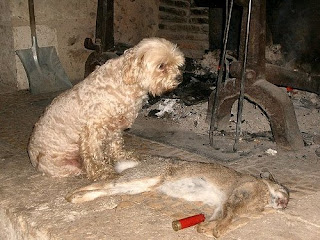 Bonnie had been with us for about five years, when her friend, our old dog Didi, a miniature Poodle and Yorkshire Terrier cross, died. Bonnie missed Didi a lot and as we had fallen in love with the Dachshund temperament we decided to look for another “mini-wire”.

We asked around, scoured the small ads and lists of breeders and discovered that finding a Miniature wired haired Dachshund (In French it’s Teckel nain a poil dur) wasn’t as easy as we thought it would be. 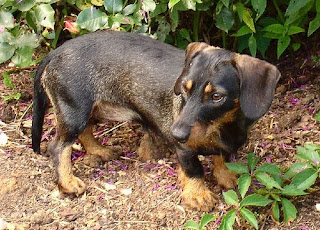 We eventually found our dog who we called Didi III (Didi was the name of Fabrice’s first dog.) Although she’s a lovely dog and a great wee hunter she isn’t a good example of her breed with her shortish hair and slightly bent legs. Like many Dachshunds, she also has the annoying trait of having a false pregnancy after she’s been in season, so we don’t intend to let her have puppies either.

We decided after Max and Judy died that we’d look for another Dachshund and we spread the word and started looking again at breeders lists. After a lot of e-mails, ‘phone calls and visits to breeders to see pups, we got in contact with a couple who live about three hours from us who have bred long-haired Dachshunds for over 30 years and had recently bred a few wire haired pups from the berlioz de ker ki douar line. 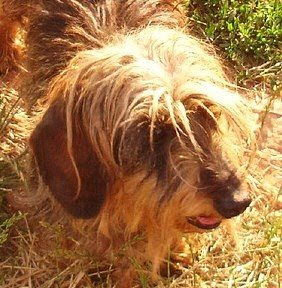 We visited their farm and spent a few hours with the breeder, talking and being shown around and we were very impressed by the condition of all of their dogs and the cleanliness of the yard as well as their professionalism and willingness to answer questions.

Of course, the two pups available were adorable and their mother was bright eyed, calm and friendly and as you can see in the photo to the left, looked exactly like our Bonnie! Choosing between the pups was impossible so we had both !

For the moment, Bonnie and Didi are ignoring the pups, spending more time outside with our visitors than they do in the house which gives Pyke our Border Collie the chance to show them the ropes. He’s responding so well to their company and the responsibility, it’s a pleasure to see him finally growing up. 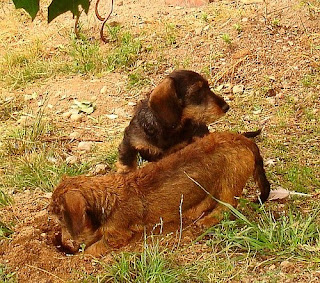 As Angie pointed out I forgot to say what the pups names are !

Their kennel names are Ebony and Emine because dogs born this year have a name startin with “E” but we’ve decided to call the Honey coloured one Jessie and the darker one Judy but they don’t know that yet !