Our Griffon Vendéen Judy died on Thursday but I was too upset so soon after Max’s death to post anything about her in the blog.

She was a big happy silly dog who spent her last six years with us at Bourrou. We got her from Yan’s (The Spice Man) parents who found her badly injured by the side of the road. They took her to the vet and were presented with a bill for 6000 francs. She had no collar or tattoo and wasn’t chipped and despite trying for several weeks they never found her original owner.

They nursed her for three months until she was well and called her Lady because she was so elegant but as she was a hunting dog,

Judy did what she loved to do and ran off regularly to hunt – sometimes disappearing for several days. Yan’s parents were concerned about her having another accident, or causing an accident – not to mention the havoc she would cause with the local wildlife. Having her became a constant worry for them and Yan asked us if we would be interested in taking her.

We were warned to be vigilant and we were – but despite that Judy would be with you, then you’d turn your back for a second and she’d be gone. A door ajar was an open invitation, she managed to just disappear when you least expected it and you’d hear her baying miles off in the woods. Judy escaped several times in the first month we had her. All the hunters in our area were supplied with her description and each time she was spotted, caught and brought back, tail wagging. 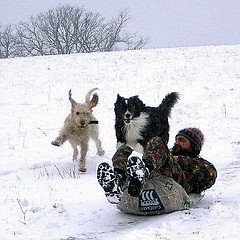 Fabrice is the local gamekeeper it just wasn’t on that we had an errant dog, so, regretfully, we decided to build a compound for her where she’d be secure when we couldn’t keep her on a lead.

She hated the compound with a vengeance (It’s now become a park for weaners when they first arrive so we can see them from the house.) and sulked and moped and looked so sad at not being included in what was going on, so we bought a chain and she was like many other dogs in France tied up under a tree just behind the back terrace and she was quite content! 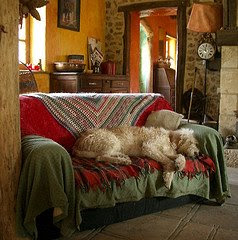 She’d obviously been loved in her last home. She was affectionate with Fabrice and our other dogs and loved children and knew what a sofa was for but at first she completely ignored me. (Which is very disconcerting indeed!)

For the first six weeks she was here she never responded to her name “Lady”. During those first few weeks we acquired a Mynah bird, Arthur, who’s owner was going back to the UK. He (Although we found out later Arthur was a “she”!) was a real character with a good vocabulary and every so often he would shout “Judy” in a high pitched voice. We noticed that as soon as Arthur shouted “Judy” Judy would look up at Arthur, so we decided to rename her Judy and from then on Lady became Judy and we had no problem getting her to respond to her name! 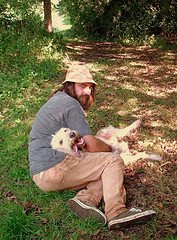 Dogs like Judy need a lot of exercise and in the summer Fabrice and his hunting colleagues take their dogs to a training and exercising park to re-hone their skills, train new dogs and initiate new hunters. Judy started going with them and it was obvious she knew exactly what was expected of her. When the hunting season opened Judy went out with the pack and from that day onwards she never ran away from home.

She was always Fabrice’s dog – a man’s dog – and I never played a big part in her life until about 18 months ago when she “retired” and I started to care for her more when she became weak with the cancer which finally killed her.

It seems ridiculous now to think that I was afraid of her when she first came. Wary, because somehow I couldn’t “connect” with her. Judy was the most gentle, placid dog I’ve ever known and we’re all going to miss her.