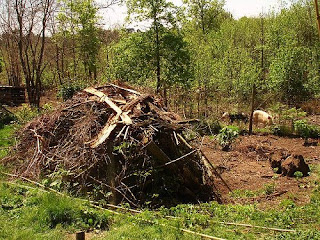 Did you know that it’s “Compost Awareness week ? No, neither did I until someone in the GROWVEG forum posted about it.

We’ve got several different ways of making compost, some methods work quickly and some are incredibly slow. The slow way we have of making compost is by using all the organic “waste” materials we have when we first clear a patch of land, adding more roots, weeds, branches, twigs, brambles, sheep and goat daggings and dog and human hair.

I’ve just found out from a reader of this blog that this system is called Hugelkultur. 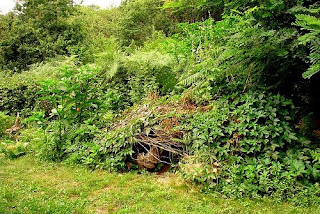 The pile then gradually becomes a home for all the insects, snakes, lizards and other animals we’ve disturbed during the clearing and gives us somewhere handy to throw organic materials. We don’t have to burn our waste – we simply walk round it and in doing so shape the paths and add form to the garden. 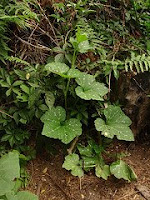 After about a year we cover the top with used goat litter and leave it for a few weeks to settle down then we use the pile to grow easy vegetables like pumpkins and plant some climbing plants like Ipomea and Virginia Creeper to decorate the heap. We never disturb or move the heap except to throw more and more things on top of it and despite having thrown many square metres of organic matter on it it never seems to get any higher. 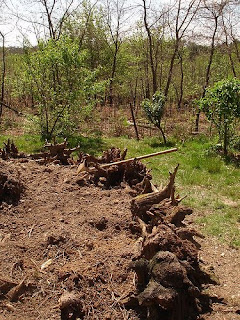 Our oldest heap had started to sink and last year we decided to leave it to rot completely to make a new raised bed.

We were going to use chestnut poles as we’ve done almost everywhere else in the garden but we were clearing roots out of the pig park after the pigs had dug round them and it seemed a shame not to use them to make something nice. So Fabrice hauled them round one of the old compost heaps and we’ll use them to retain the earth for a raised bed. We also gathered up lots of stones and used those and the remaining branches to backfill the roots to improve drainage in the hope that they’ll last a bit longer.

I’ve started planting around the outside of them already and the chickens are still “digging” the middle bit for us and getting rid of all the grubs and insects. 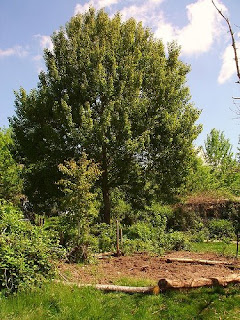 When we cleared the little wood at the back of the house to make a garden, we decided to keep the well-shaped trees which were too beautiful to cut down. They give us a bit of shade and interest and provide nesting sites well out of the way of our cats and the birds don’t seem to mind our presence.

Under the trees, I grow raspberries and other shade loving plants and store cuttings for potting up and they do well in those conditions. There are a few Oaks and one beautiful Aspen Populus tremula, where the Collared Doves nest each year.

The Aspen’s roots go on for metres and send up new little trees every so often but I just work around them trying to keep the planting between the roots and the veg far enough away so that they don’t suffer too much. At the south of the tree we’ve had a compost heap which we’ve also made into a new raised bed this week so there will be loads more room this year for summer veg.