As you’ll know if you’re a regular reader of our blog, we’ve been looking for another Border Collie to work with Max. We tried a mating using Max as the sire which didn’t work unfortunately, so we’ve kept looking out for suitable pups, spreading the word that we were still looking. 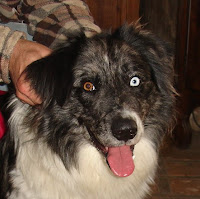 This dog is from the same bloodlines as Max. He’s big boned and long-haired and of course a Blue Merle Border with one brown and one blue eye – which is taking a bit of getting used to! (Correction, I’ve just discovered he’s a Black Merle! More details later…)

His presence is so like Max’s that we thought it would be worth a try to train him to work with our sheep and goats. He’s almost a year old. His previous owners kept him in an apartment and that just didn’t work out so we decided to take him and give him a job.
We’ve also changed his name to Pyewackett as someone (Who shall remain nameless!) said recently that our animals were all our “familiars”.

Pyewackett can be shortened to something easier to use when he’s working but we’ll wait and see what that turns out to be when we get to know him better.

10 thoughts on “Announcing the arrival of our new Border Collie Mr Pye or Pyke or….”