Some of you may have noticed that there’s a new Logo in my links section and that I haven’t been around for a while despite my new fast computer.

I’ve recently become a moderator for The France Forum – a new forum which I can recommend (of course!) to people thinking of moving to France, who have a holiday home in France or who already live in France. As well as the normal rôle of moderating, I’ll be adding my own thoughts and experiences on living in France, helping answer questions on French legislation and red tape, smallholding in France and of course all the other subjects which interest me. The forum has been “open for business” now for just ten days and we’ve attracted a lot of friendly and helpful people. So far, we’ve 476 members who have made a total of 9230 posts!

I’ve been so busy catching up with the cyberworld that I’ve been ignoring my blog and I’ve broke the promise I made to myself when I started it; that I’d post in it at least once a week. So I’ll get back on track I’ll do a quick update of what’s been happening here at Sourrou.

We’ve been in contact with Altess’ (Max’s girlfirend – see post below.) owner and she doesn’t know whether her bitch is pregnant or not. She’s not gained much weight and she’s eating normally but we’re still hoping…

Fabrice and I have swopped bedrooms. His is huge and still it was difficult to find a space to walk on with stepping on something suspicious. He’s taken mine over and I’ve cleared his out and started organising the storage space and lighting. I mentioned to a neighbour that I was going to do some decorating and he gave me a box full of Ochres and Oxides that he’d had stored in his barn for years. I’ve started to paint the walls and it’s taking shape and it’s already become Saskia’s favourite room. I’ll post a few more photographs when I can. 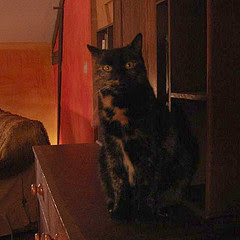 5 thoughts on “Lots going on here!”